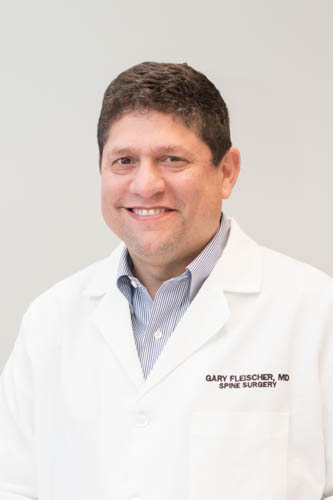 Dr. Gary D. Fleischer is Distinguished Military Graduate and an Honors graduate of Princeton University’s School of Engineering. As an officer in the United States Army, he attended Tufts University School of Medicine. He pursued his post graduate training at Walter Reed Army Medical Center and at Dwight David Eisenhower Army Medical Center. Subsequently, he completed a Spine Surgery Fellowship at the prestigious Spine Center at University of California, San Francisco. He continued to serve for many more years in the Army, up to the rank of Lieutenant Colonel. During that service, he completed four overseas tours of duty. He served as a field medical commander and deputy commander of a large Combat Support Hospital. When returning from overseas, he was assigned back to Ft. Bragg’s Womack Army Medical Center, where he served as the Chairman of the Department of Clinical Investigations and started the spine surgery program. During his time in the military, he served in small unit operations as a Flight Surgeon and a U.S. Paratrooper.

After leaving the Army, Dr. Fleischer has continued to be active in clinical research as an attending spine surgeon and founder of the New England Neck and Spine Institute. He has continued his fundamental research work with dozens of academic publications and scientific presentations at international conferences focused on spine surgery and orthopedics. His research and scientific work have focused on the biomechanics of spinal implants and the use of stem cells in regenerative medicine.  He continues to serve as a scientific oversight officer in a stem cell research company in Minneapolis, and he holds multiple patents for inventions stemming from his scientific research.

In addition to his work here in the Raleigh area as a member of the Bone and Joint Surgery Clinic, Dr. Fleischer serves as a member of the Ethics Committee of the prestigious, international Scoliosis Research Society. He is also the founder and president of the Visiting International Surgeon Association, a non-profit health care organization that coordinates with the State Department to build medical care systems and train orthopedic and neurosurgeons in Mongolia and Nepal. He has served on dozens of humanitarian missions and has held academic appointments as a professor of orthopedics and surgery at multiple universities in Korea and Mongolia.